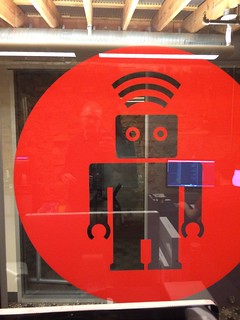 I announced on Twitter last week that I wrapped up my time at WebAssign and started at thoughtbot’s Raleigh office.

WebAssign is working on some amazing ways to help both instructors and students in STEM courses be more effective. The team I just left is a great bunch of fellows. I wish them and the company well.

The new gig takes me away from the environment tooling and automation that I was working on and more toward straight application development. After spending the last three years on operations-focused development, I’ll be building applications that help developers and designers at thoughtbot and for our clients.

I spent a fair amount of time researching thoughtbot ahead-of-time and, as good as things looked from what I could see from the outside, after about a week working there, it looks even better on the inside. I’ll be writing more about my experience onboarding with the company over at the Giant Robots Smashing into Other Giant Robots blog soon. But, here’s a key thing that’s excited me. This past Monday, my second day, I started head down on a usability enhancement for an internal tool. On Wednesday, the feature was live in production.

I know there are shops where the first day is pushing something to production, which is legit. There are a lot of shops that don’t have that kind of pipeline worked out, or it takes a lot longer. This was three days for me to write a small but meaningful addition to this product, iterate on it through a pull request code review and ship. I’m really happy about that.

There’s another facet I thought about today on my team’s daily coffee walk. In The Passionate Programmer, Chad Fowler writes:

Legendary jazz guitarist Pat Metheny has a stock piece of advice for young musicians, which is, “Always be the worst guy in every band you’re in.”

A big part of what I’m looking for is being that “worst player” again and learning to play and perform differently and better. It’s a different experience, a little bit strange and it feels pretty good. Onward.